The Geology of Table Mountain

What rocks are found on Table

The Cape Peninsula which includes the Table Mountain chain are made up of three rock types of different ages. Cape Town, Signal Hill and Sea Point constitute a mass of tilted Malmesbury slates. This is the oldest formation in the peninsula which consist of alternating  layers of fine grained greywacke sandstone and slat, deposited as muddy sediments several million years ago. The effects of heat and pressure metamorphosed this sediment into slatey rocks. The best place to see examples of this rock type is in the rock rodges jutting into the sea along the Sea Point beachfront.

The upper cliffs of Table Mountain are made up from Table Mountain sandstone. This sedimentary rock was formed by millions of years of river borne sediment which piled up upon itself and was compressed by its own weight. This rock type has been subject to the natural forces of weathering for millions of years , meaning that what we see today is a fraction of the original deposits.

The third rock formation is that of Cape Granite. This is most clearly seen in the huge rounded boulders on the slopes of Lions Head, at Boulders Beach and at the bottom of Chapmens Peak drive. The Cape Granite was formed from molten rock which intruded into the malmesbury group formation. Although originally intruded at great depth prolonged erosion eventually exposed the granite to the surface and it now forms the base on which the younger sedimentary rocks of Table Mountain are deposited. 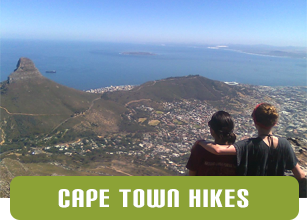 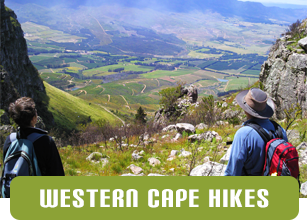